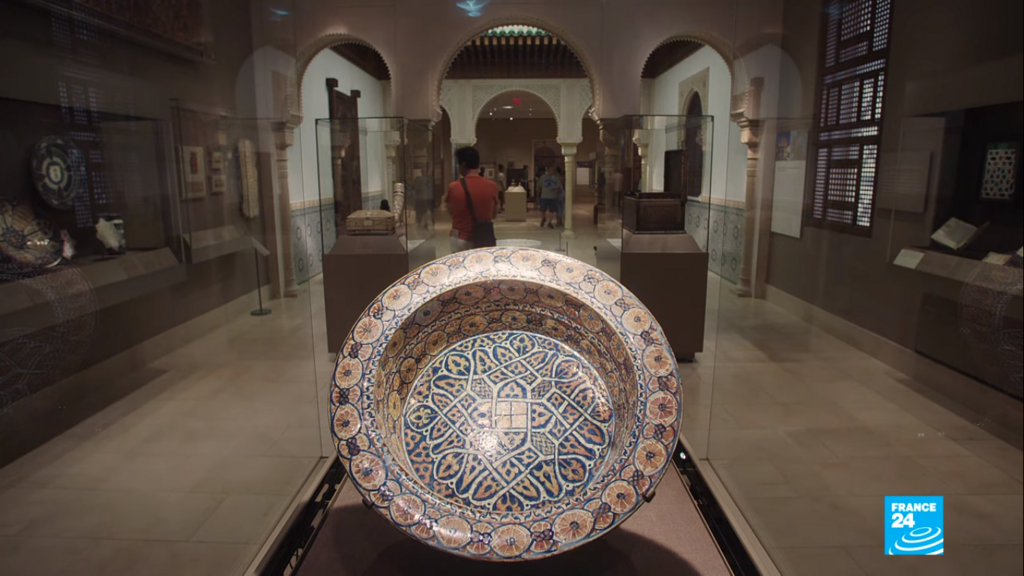 From the expansion of the Umayyad Empire in the seventh century until the fall of the Ottomans in the early 20th century, Muslim artists produced a stream of masterpieces that circulated across the globe – adorning places of worship, royal courts and the grand residences of the nobility. FRANCE 24 takes a closer look at some of the treasures of Islamic art.

The collections of Islamic art in celebrated museums such as the Louvre in Paris and New York‘s Metropolitan Museum of Art showcase the rich variety of techniques and materials deployed by artists living in the Islamic world.

Contrary to popular belief, works of Islamic art are not primarily religious. Artists and craftsmen reworked the motifs and techniques of pre-Islamic art to create a new aesthetic, one that displays an astonishing mix of cultures and civilisations going back to ancient times.

The art of calligraphy was developed during the reign of the Umayyid dynasty – which governed much of the Middle East and North Africa from the mid-seventh century to the mid-eighth century before remnants of the caliphate created an emirate in Cordoba, in what is now Spain, that lasted until the 11th century.

Calligraphy emerged, in part, from a ban on the use of human figures inside religious buildings and the centrality of the Arabic language in the culture. In addition to the art of handwriting, mosques of that era showcase an exceptional combination of mosaic and foliage, borrowed from Ancient Greece and Rome.

The great Umayyid mosques in Damascus and Cordoba, the 15th-century “Blue Mosque” in Iran and the 17th-century Taj Mahal all exemplify the rich aesthetics that drew on the skills of artists from an array of disciplines: glass craftsmen, chandelier-makers, goldsmiths, upholsterers and many more, using materials such as gold, jade, marble, ebony and African rosewood.

The beauty of this art and architecture was also the product of the scientific influence in Islamic art. Examples of this include the astrolabe – used by scientists and sailors to pinpoint the positions of planets and stars – and the Arabic manuscript translated from the first-century Greek work De Materia Medica in ninth-century Baghdad. Both of them show us a culture with science at its heart, as well as being magnificent works of art in their own right.

The Abbasid Caliphate – which overthrew the Umayyids in the year 750 – launched a huge push for translation, notably of the science and philosophy works from Ancient Greece and Rome. In doing so, they bequeathed many beautiful manuscripts – as well as abundant scientific knowledge – that was adopted by the West and contributed to the Renaissance.

Architectural gems in the form of mosques used an aesthetic based on calligraphy, flowers, colours and geometry instead of the human image. However, other places such as palaces, the houses of the nobility, decorative objects and books made ample use of figures of people and animals.

The Monzon lion is one of the foremost examples of this style. Now on display in the Louvre, this cast bronze masterpiece was produced in Al-Andalus (Islamic-era Spain) and experts believe it was produced in the 12th or 13th century and used as the mouth of a fountain. A 17th-century Iranian tile panel on display at the Met in New York shows a woman serving wine to a European man.

Illustrated books provide similar proof of the freedom of expression available to the Islamic arts. Notable examples include the Persian epic poem Shahnameh – written at the beginning of the 11th century – and Jami-al-tawarikh, a 14th-century work of literature and history that includes a drawing of the Prophet Jonah and an angel.

Techniques from Islamic art were used in the West in later centuries, including in Spanish architecture and Italian glass-making. Artworks fashioned by Muslim artisans were also used by Europeans for religious ceremonies. Perhaps the foremost example of this is the Baptistère de Saint Louis, an ornate cup made of hammered brass with gold, silver and niello linings. Made in Egypt during the Mamluk Sultanate, it was used for the baptism of several French kings including Louis XIII, who was christened in 1606.

The journey that Islamic art has made across the Western world is a testament to the intimate relationship between the two cultures as well as to how these masterpieces form part of the heritage of all of humanity.