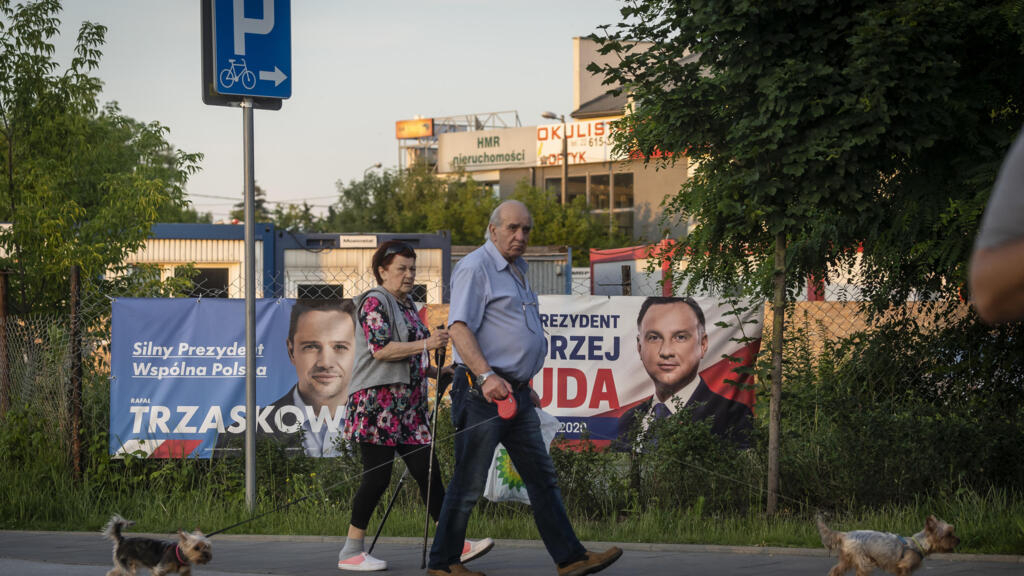 Concerns over democratic standards and bread and butter issues top the agenda as Poles began voting on Sunday in round one of a tight presidential race that had to be postponed because of the coronavirus pandemic.

Incumbent Andrzej Duda, 48, is campaigning for re-election in a vote that could determine the future of the right-wing government that supports him.

Ten candidates are vying to replace him, but opinion polls show that Warsaw Mayor Rafal Trzaskowski, a liberal from the main Civic Platform (PO) opposition party, will enter a neck-and-neck run-off on July 12.

Victory for Trzaskowski, also 48, would deal a heavy blow to the Law and Justice (PiS) government, which has relied on its ally Duda to endorse polarising legislation, especially judicial reforms.

While the PiS insists the changes are needed to weed out judicial corruption, critics and the European Union insist they erode judicial independence and democracy just three decades after Poland shed communism.

US President Donald Trump, who regards the populist PiS administration as a key European ally, gave Duda his blessing this week.

Trump invited him to the White House on Wednesday as the first foreign leader to visit since the coronavirus pandemic began, just four days ahead of election day.

Originally scheduled for May, the ballot was postponed due to the pandemic and a new hybrid system of postal and conventional voting was in place on Sunday in a bid to stem infections.

While official figures show over 33,000 confirmed cases and more than 1,400 deaths, the health minister has admitted that there are likely up to 1.6 million undetected cases in Poland, an EU country of 38 million people.

Duda has promised to defend the governing party’s raft of popular social benefits, including a child allowance and extra pension payments — a key factor behind the populists winning a second term in October’s parliamentary election.

Bread and butter issues are weighing heavily on voters’ minds as the economic fallout of the pandemic is set to send Poland into its first recession since communism’s demise.

“I’m happy. I can’t complain; I get an extra pension payment and children are getting 500 zloty,” Irena, a 63-year-old pensioner, told AFP in the central Polish town of Minsk Mazowiecki.

“I’d like this to continue,” she added, declining to provide her surname.

Duda has also echoed PiS attacks on LGBT+ rights and Western values, something analysts see as a bid to attract voters backing a far-right candidate.

Campaigning with the slogan “Enough is Enough”, Trzaskowski promises to use the experience and contacts he gathered as a former European affairs minister to “fight hard” for a fair slice of the EU’s 2021-27 budget, and to repair tattered ties with Brussels.

He has however vowed to keep the PiS’s popular welfare payments.

While many see his PO party as a weak and ineffectual opposition, Trzaskowski supporters regard him as a bulwark against the PiS’s drive to reform the courts, something they insist risks destroying any notion of an independent judiciary.

“I’m a lawyer and this (PiS justice reforms) affect me directly,” Marek, 60, told AFP in Minsk Mazowiecki, also declining to provide his surname.

“It’s as if a blacksmith would go to a watchmaker’s shop and try to put things in order. People might support it, but in the long run these reforms will have to be reversed.”

Since winning power in 2015, both Duda and the PiS have in many ways upended Polish politics by stoking tensions with the EU and wielding influence through state-owned companies and public broadcasters.

Some analysts view the election as a crucial juncture: a second five-year term for Duda would allow the PiS to make even more controversial changes while defeat could unravel the party’s power.

A win for Duda would pave the way to “bolstering ‘Eastern’ tendencies, like the rise of oligarchs… and a drift to the Budapest model (of Hungary’s Viktor Orban) – that’s the danger,” Warsaw University political scientist Anna Materska-Sosowska told AFP.